One of the winners of Bango Penerus Warisan Kuliner (PWK) 2018 was Ayam Madu Si Bangkong. Founded in 2009, the restaurant is well-known around Bandung, and always sees a healthy crowd on both weekdays and weekends.

The successful restaurant was the brainchild of Fajar Mandala who saw the opportunity to sell food near his college, the Telkom University. When he persuaded his mother into opening a small restaurant close to the campus, she agreed. In the beginning, they sold a variety of dishes, but they soon realised that grilled chicken was their most popular dish, and decided to focus their efforts on making honeyed grilled chicken.

For two years after graduation, Fajar worked in Jakarta, but then decided to return to Bandung in order to advance his business. He used his high school nickname, Si Bangkong, to brand the restaurant. As his grilled chicken business grew, Fajar realized that leaving his Jakarta job was the right move. Starting from a small restaurant, Ayam Madu Si Bangkong eventually grew to become a favourite around the campus and surrounding neighbourhoods.

Want to enjoy the same success as Ayam Bakar Madu Si Bangkong? Fajar shares his top 3 tips on how to run a culinary business.

First of all, your food must be delicious!  According to Fajar, the secret that makes his grilled chicken unique is that he braises the chicken in honey so the seasoning truly seeps into the meat, making it different from those who glaze the chicken with honey during the grilling. This was the recipe he learned from his mother.

While he may have started with a small restaurant, Fajar established strict control over the quality from the very beginning using the industrial technology knowledge he learnt in college. Even a small restaurant must adopt standards equal to that of larger operations. From chicken to iced tea, strict quality control means that Fajar can ensure the taste of all his dishes stays the same from day to day. Plus, quality control keeps customers loyal.

As someone who grew up in the digital age, Fajar understood the importance of digital marketing. The knowledge he gained in college is applied to his business in the best possible manner. The result of good digital marketing is evident in the huge number of online orders, with many even coming from outside of Bandung.

Bango Kecap Manis 1.52kg
12 74 Points
Product is added to favourites
You should login to add product as favourites 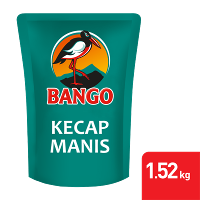